Well… as you may know Red Ted started school this year (in the UK “Reception class”  starts in the September after the 4th Birthday). It is quite young, but there is lots of play and as much as anything it is getting children used to school structure.

Red Ted has absolutely *lovely* teachers and the kids have all settled really quickly. They are frequently allowed to bring things in for “show and tell”. And as a crafty household, this means, that Red Ted brings in some of our craft results to show.

Then….. the teacher asked if I fancied making some things with the kids. Uhm. Really? ALL the kids? But there is like, 28 of them? I am only used to crafting with, uhm, 2.

I guess this REALLY does put my crafts to the test!

So. How to survive?

Firstly… I arm myself with:

Well, working with 28 kids, the last thing I want, is to get a little wiffy! The Nivea Stress Protect, has already proven to be effective in an extremely stressful cake making session, as well as a full day shopping experience, so I am sure it will be coming in handy again at school.

If there is one thing I say to other parents about crafting and avoiding “getting stressed” is to prep. So if you are looking at crafts with 28 children, how can you prep said craft and make it easier/ less messy/ less likely that the children will require your help?

I picked the Chinese New Year Dragon Puppet Craft to do with them. 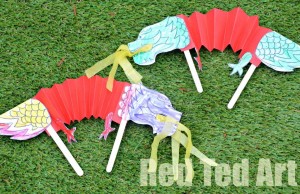 How could I change the process in our favour?

We decided to make it back to front: Cut, fold, assemble, stick and THEN colour. This meant that the children who dislike colouring or get bored of colouring easily would still finish their puppet. We also taped on the lollipop sticks rather than glue them on (with gluing you have to let them rest, whilst the glue sets).

How did it go?

BRILLIANTLY. The kids were AMAZING. I Was so surprised at how good they were at cutting. How no one got BORED of cutting, how they all wanted to assemble the puppet and did great colouring – some in more detail than others, but still a fabulous job.

It did get a bit stressful at times, when several kids needed the “same step” showing to them at the same time, or when one needed help with the tape and the other needed some more glue. But we managed. And with the help of Nivea… ahem, I left the school unscathed and fresh. Hooray again!

And great shop Red Ted’s class, I am so proud of you all!