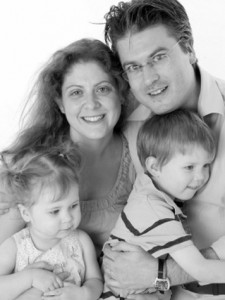 We *finally* got round to having our family portraits done.. it was lingering at the back of mind for ages and I just wasn’t getting around to it. Pip Squeak has gone through a massive growth spurt recently and it just reminded me of how quickly they are growing up and that I wanted to catch this, as well as get a photo of all of us together.

A friend of mine recently did hers with Snappy Snaps in Wimbledon – yes, that is right, not the first company that springs to mind for family portraits, but I am here to change your mind…

I went with Snappy Snaps in Wimbledon for two main reasons –

2) they seem to be the only company around that are very flexible on their packages! I have a large family, that live all over the place and  I knew would end up needing extra prints and that they would all want different ones. Snappy Snaps Wimbledon had a package were you get some of the photos on CD – which was just what I was after!

Well, firstly, Snappy Snaps use renowed photographers in their Snappy Snaps Studios. They are friendly, approachable and not at all intimidating (as some photographers can be). They have a little room all in white decked out ready for the portraits. Not a massive room – but then we didn’t need more space!

The photographer was very sweet and great at putting the children at ease. With a mixture of props and instructions we took over 350 photos in a space of 30-40min – just right for two young children getting tired. Not just that, but with Pip Squeak potty training, she was totally cool about “anything that may happen”, though thankfully, nothing did. As a mum though it was nice to be put at ease. A  week later I went back on my own to view the photos and pick our selection. 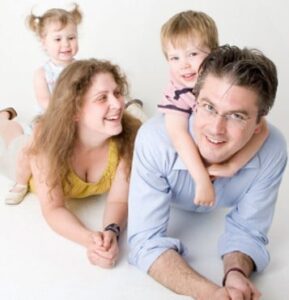 I love that they projected all the photos onto the wall, I got to sit on a comfy sofa and look at the ones that they had already sifted out for me. I got to pick, park, bin. And then revisit and repick and repark and bin. I got to see the photos in  colour and black and white and I had plenty of time to ooh and aah.

The image below shows you the wall projections that I was shown. The first one shows my selection for the triptych frame. The second shows how we sifted through the photos and look at them all in different colours and formats. Amazingly they can even do things like – “move one head” from one shot on to “another shot”… Don’t you just love the triptych??? Aren’t Pip Squeak and Red Ted just lovely?

The Package & Flexibility of Snappy Snaps

I went for a package where I get 10 photos on CD, 6 prints and one large frame (or 3 canvases) with 3 photos that the Wimbledon Snappy Snaps had on offer.

You do have to check at your local Snappy Snaps studio though – as they do all have slightly varying packages and grades.

After much ooh and aahing and not being able to decide on “just 10 photos”, the Wimbledon Studio just offered to adapt the package for me: I got my 10 photos on CD AND was allowed to choose an extra 6 (instead of having them printed). This is probably one of the best parts of our experience – I had spoken to a number of other photographers and NOT ONE was flexible about me have the photos on disc – not that I was trying to be cheap – I would have been happy to pay a premium. And with the Wimbledon Snappy Snaps I got exactly what I wanted, whilst the other photographers made me feel “bad” about having even asked.

The experience was very much a positive one, I would recommend Snappy Snaps Wimblon to anyone and we are so excited to have wonderful family portraits – finally – as usually there is at least mummy or daddy missing!

This is a sponsored post – Snappy Snaps Wimbledon gave me a discount in return for a post about my experience – the words are my own and reflect what I truly believe.