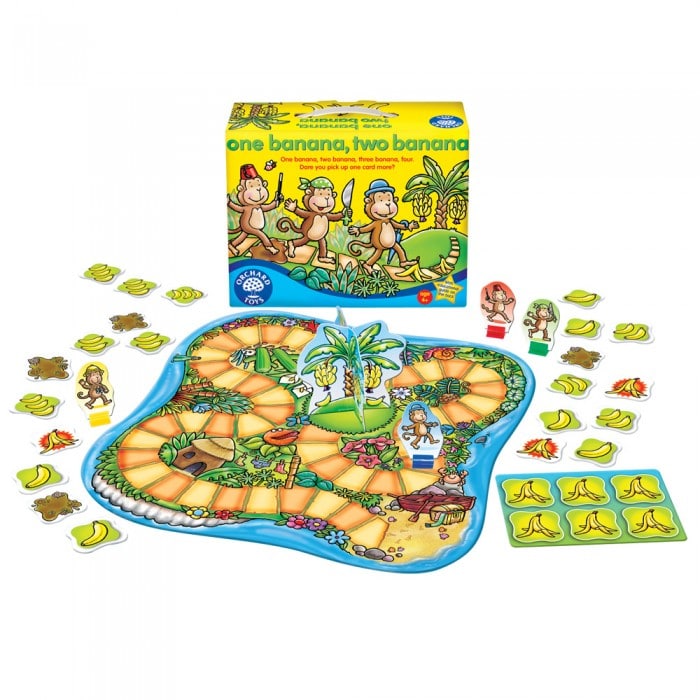 You may already know, that I am great fan of Orchard Toys board games. It is great that Red Ted (3) is finally “at an age” where we can start explaining rules to him and he is actually kind of getting them. So we were very pleased to receive One Banana, Two Banana for review. Hooray for Orchard Toys!

Red Ted got very excited straight away – he knows the drill… He loved setting up the “puzzle” playing board and looking at all the pieces. Pip Squeak (1) straight away started sitting on all the pieces and taking them away. Funny little miss, she knew exactly what she was doing!!

As this game is for 4+yrs, there is a “new concept” to introduce to Red Ted – not just that of moving around the board, but that certain pieces “mean something”. The aim is to reach the Banana Tree at the centre first. You move forward by picking up “banana cards”. You get to pick as many as you want – but take care, pick up the slippery banana and you go a backwards. Pick up the swamp and you “get stuck”, but do get to move on. So the trick is – to get just enough bananas without the slippery one! So you can play tactics. I know the tactics will be way beyond Red Ted for a while, but in the meantime he loves the “Oh no!” exclamation I make when we turn the slippery banana round.. and ALWAYS wants to get it…

Luckily we have Incey Wincey Spider – which already has that “forward or backward” move type concept. I think that that help significantly in him picking up the basics of the game – he is a little on the young side and I have to repeatedly say “now you do this”, but he still LOVES playing. I can see, that as his counting skills improve, he will love adding up the different bananas to work out how far he has to go.

Once again, a mighty Thumbs Up!