Well! Remember all my Black Apple Dolls? The one’s I cannot get enough of and that I keep making? The easy Rag Dolls that follow the Martha Stewart pattern (Guest Post by Emily from Black Apple). Well… Sewing for boys can really be a challenge and I decided it was about time I sewed something for Red Ted!  And what would be more appropriate then a Teddy Bear? I used the Martha Stewart Rag Doll pattern – added some ears and made the legs a little wider… Perfect keepsake gift for a boy!

I used 100% recycled materials – an old jumper of mine (which I have made a No Knit Stocking out of in the past), one of Red Ted’s toddler t-shirts and some jeans material. I am sooooo excited and already love the keepsake teddy to bits. 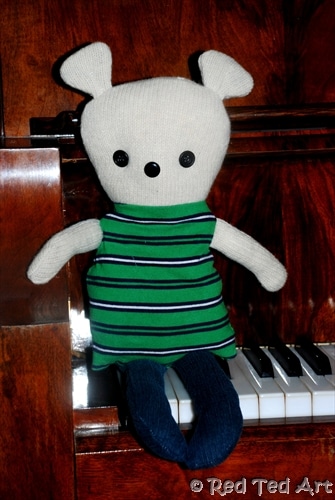 I shaped the nose a little by putting more stuffing there. And when sewing the buttons on for eyes, I pulled the cotton “tight” to give the face a little shape.

Experiment with where to place the eyes and ears… your teddy will look SO different depending on where you put them!

Sewing with the jumper is a LITTLE harder than the rag dolls, as it is quite bulky. I found it helped to sew the ears loosely in place before going over it with the machine. It was fine though. Just a tiny bit fiddlier! 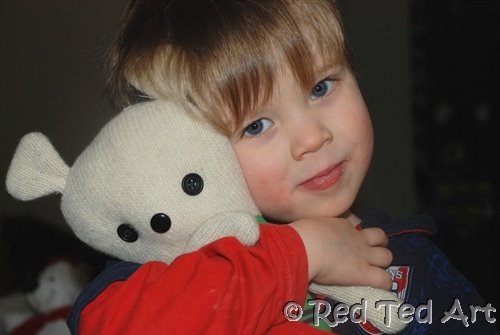 Are you inspired to get sewing for YOUR little boy?!  What would you sew?