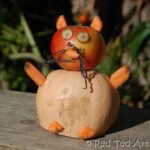 Welcome back to Kids Get Crafty! Today we made lots of funny creatures from FOOD! Before you worry about any “wastage”… all food creatures came to harm in the end… and landed in the soup pot. Modelled with. Played with. And EATEN. Mwahahahahahaha. The mornings activity were inspired or more should I say encouraged by the funny people at innocent. They sent us a bunch of vegetables, toothpicks and told us to get crafty! 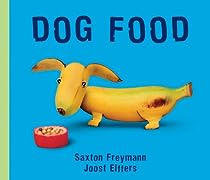 Dog Food, by Saxton Freyman – There is no book more appropriate than the series of books by Saxton Freyman – lots of funny photos based on food… Dog Food won the New York Times Best Illustrated Books Award one year. Red Ted things it is hilarious. Dogs made from bananas (see front cover), radishes, cucumbers… on and on. Lots of play on words too – e.g. “Dog Bowl” – is not a dog bowl in terms of where dogs eat from, but is a radish dog bowling with an olive as a bowling ball and half bananas as a pins. We love how all the dogs seem to have really come to life – with expressions and characters. There words are simple and few – so if you have a child learning to read, this could be a fun book to get!

Well.. I decided to hand this one over to The Englishman.. sometimes it is nice to have a fresh take on things and the children love sitting down and doing an activity with their father too. We concentrated on the fruit and veg provided, though Red Ted asked to use an additional apple and Pip Squeak decided to eat the pear.

All fruit and veg were eaten at the end.

Materials: Veg selection: squash, cucumber, small turnip (?), carrot, pear, apple, toothpicks – they arrived in a box with black “paper wool”, so we decided to use that too 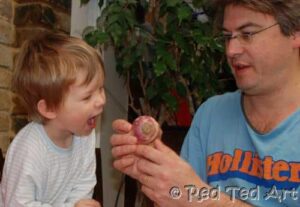 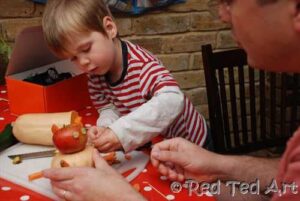 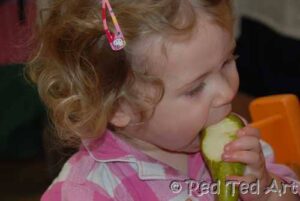 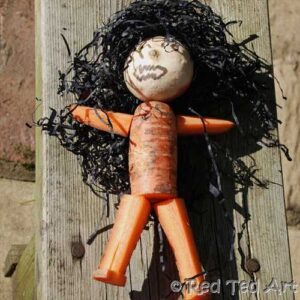 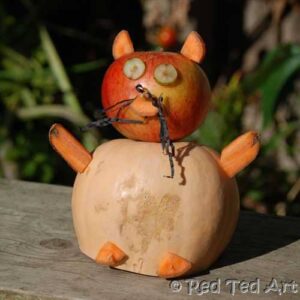 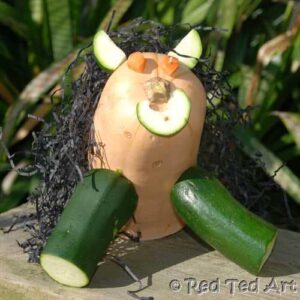 And with the leftovers a vegetable pig, called Migs

Here they are all together with their names spelt out: 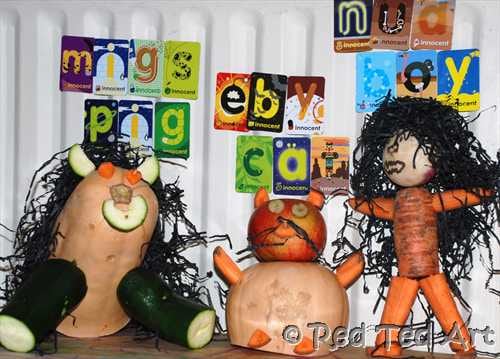 What do your reckon? I think Nud looks a bit voodoo-ish…or maybe rock ‘n roll? Do you like getting crafty with vegetables?