Welcome back to Kids Get Crafty! This week we have a shadow puppet and theatre for you.. As the afternoons get darker earlier, this is a wonderfully fun activity for kids of all ages! I think it is a great way to embrace the coming winter months and to look forward to the darker evenings and make the most of them! We also had a go at “hand shadow puppets”. In some ways I think we almost enjoyed the hand puppets more. So.. let this inspire you to explore shadow theatre full stop!

I have been meaning to make these for AGES now. Really ages.Probably a whole year… and no idea why it has taken me this long to have a go! It just has. I think I wanted to come up with a craft that small hands could take part in. As it turned out, I made it all and Red Ted watched. He was perfectly happy watching, just didn’t feel like joining in. I guess that is how it sometimes.

Two other blogs that helped me on my crafty journey this week were Mini Eco – I used her cereal box theatre instructions and the ingenious use of using coffee stirrers (thinner than lollipop sticks) and also love Seven’s hugely colourful wild things puppets. Both blogs are REALLY worth a visit if you are not familiar with them! 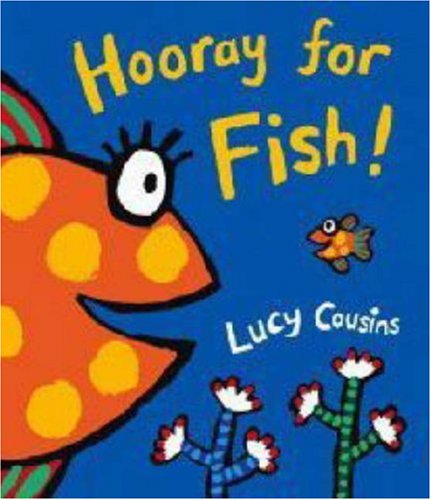 Hooray for Fish, Lucy Cousins. This was one of Red Ted’s “first” favourite reads – I picked up a hardback copy at Tate Modern Bookshop. He really enjoyed it the most 9 months – 12 months, though he does dip back into it every so often. I now know all the words practically off by heart! Pip Squeak also enjoyed it tremednously. I think it is the combination of lovely rhyhming flow and fun delightful fish to surprise on every page. Parents will like it too as there is plenty counting going on, lots of colours to identify, stripes, spots etc etc so they are definitely learning too!

We decided to make our own “Shadow Puppet Aquarium”. We thought we could make lots of little colourful fish and turtles and snails. Which did. But then we also had a good play with our hands.. making mainly birds and ducks (as that is all that mummy can do) and some Red Ted’s (i.e. Red Ted’s shadow…). It was fun and the shadow play activity on its own is highly recommended.. we now have repeat performances.

We enjoyed out cereal box theatre puppet, however found it restrictive in the sense that we had to  make very small puppets. I think we will make some bigger ones next time and just project them on the wall!

1) As mentioned I followed the instructions from Mini Eco for her cereal box theatre. The only thing I did differently, is that we kept the “top of the box open” and decided to insert our puppets through the top and not the bottom… so, unfold your cereal box. Then cut out two rectangles – one for your screen and one for the light. Keep the card you cut out to make the puppets.

2) Glue on a sheet of white paper as your screen

3) Re assemble the box but inside out – so you have a nice neat theatre. As mentioned, we kept the top open. I used some cloth pegs to hold it all in place whilst drying.

4) Make your puppets. I cut out some simple fish, a whale, turtle and snail. And encouraged Red Ted to stick the tissue paper on. He wasn’t interested. I tried to get him to do some drawings, that I could cut  out and make into a puppet and we made one “large black pumpkin” like shape. He didn’t feel like doing more. That is the way it i sometimes! Stick on your coffee stirrers. We stuck them “coming down”… I found nail scissors very useful for the small shapes. (Oh the snail comes in from the side..)

We then had a go at Hand Shadow Puppets. Here are some old traditional instructions that I found on Butterfly Rocket:

And some more from “We Heart It“:

AAAANNNND if you are REALLY keen.. check out “what you can really do” with hand puppets on youtube (sorry, it wouldn’t let me embed it for you).