Well… where did the last two months go?! Already it is Kids Get Arty time – our chance to explore an artists: looking at what the artist made and how the artists worked. Then have a go ourselves! For this Kids Get Arty session, we decided on David Hockney – hailed as one of the most influential British artists of the 20th century and an important contributor to the Pop Art movement (my, the things I am learning!).

We chose Hockney, as my mother in law took us to see his exhibition at the Royal Academy in London a few months back. The exhibition was all about “A Bigger Picture” – Hockney’s larger than life paintings. Pip Squeak and I ADORED it. All those amazingly beautiful and vibrant colours. Red Ted crouched down every so often and started drawing in is notebook (I was rather smitten). He was less interested in the colourful paintings that appeal to his sister and me and was drawn to those paintings showing buildings, structure and roads. One such piece of art was “Pearblossom Highway”.

This David Hockney exploration for kids was first published in July 2012 and republished this month for those visiting the current Hockney Exhibition at Tate Britain.

Here are some of the artwork we saw: 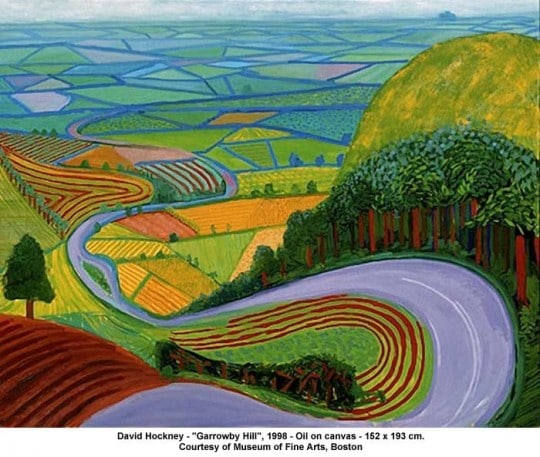 Garrowby Hill (1998) – One of my favourite, I LOVE the lilac winding road!

Arrival of Spring (2011) – Both Pip Squeak and I adore this HUGE painting made up of a number of panels. 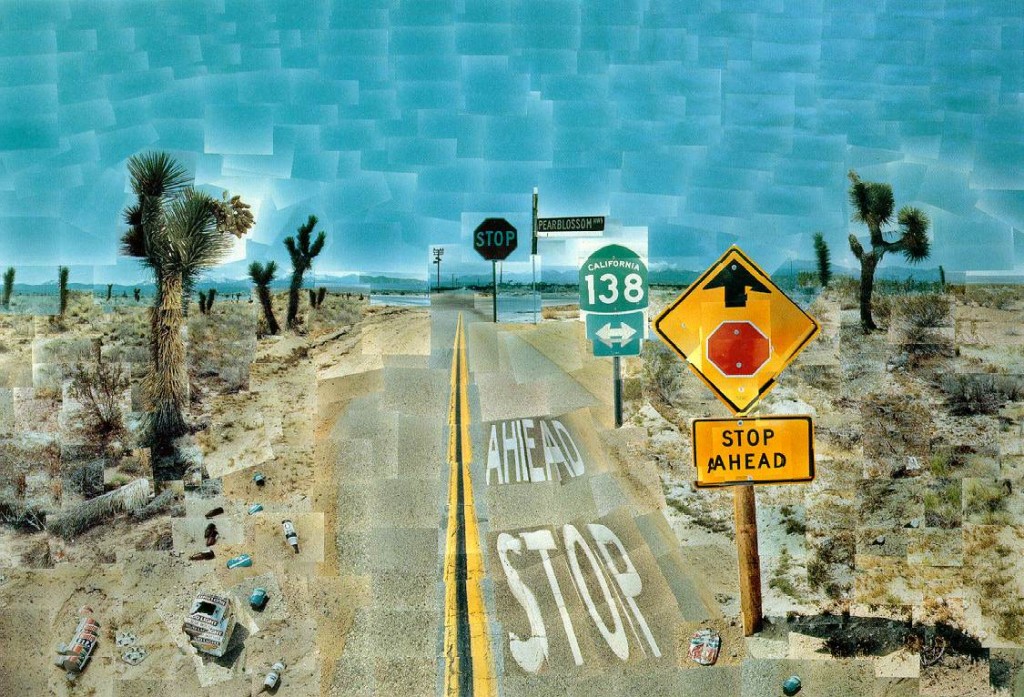 Pearblossom Highway – Red Ted’s favourite and choice of postcard on his way out.

Pearblossom Highway  is one of the best known examples of David Hockney’s photo collage. Hockney referred to his photo collages as “Joiners” – something he stumbled upon: Disliking the “wide angle lense” photos that contemporaries used (as they distorted images), he would take  a series of polaroid images and join them together to form a large picture. He then realised that the final result told a story and started exploring the medium of photography more. One of his early works is of his mother: 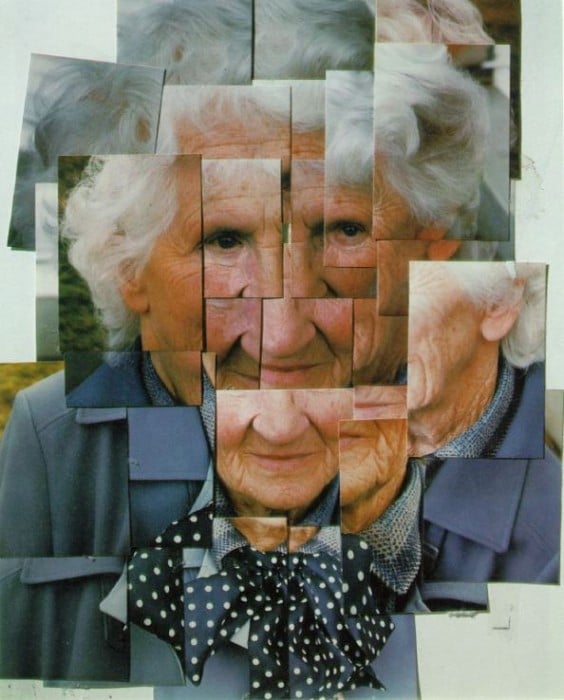 The image often is made up of photos taken from different perspective, reflecting Hockney’s interest in Cubism.

Anyway. I digress. So.

Red Ted……. what did he make of all this?! Well the Pearblossom Highway was one ofthe postcards he chose at the end of our museum visit. He calls it his “glass picture” (I guess it looks like shattered glass to him). I asked him what he thought about the picture? How it made him feel? What he liked? What his favourite part was? etc.

About our Piece of Art:

Subject: The place we stayed at during our holiday in France, photos taken over the course of a week – with varying weather conditions

Photographer: me (!), though I did try to get Red Ted to take some of the photos. However, he found the large camera difficult to handle (he is quite good on the mobile phone camera though and maybe we will try that next time!) 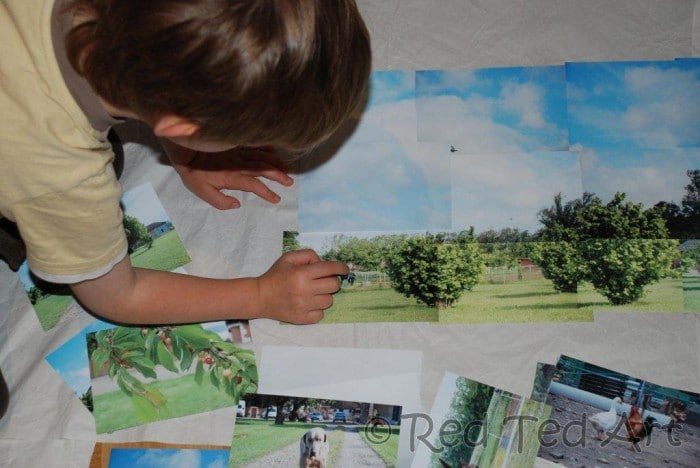 We then decided to make a photo collage of our holiday. The focus of course being on photos. I liked the idea of reflecting Hockneys “road”. So we looked for a scenery that included a road as a central focus. I showed Red Ted what it looked like through the camera and then suggested to him, that we broke the picture up and took lots of zoomed in images. I also told Red Ted, that a collage is a great way to add “hidden detail”, that means something to you, or that reflect (in this case) your holiday and that we could add things to our photo collage, that are not immediately apparent… in our case, we added a photo of Red Ted’s quad bike ride, as well as the animals – some horses, sheep, a cockrel etc. 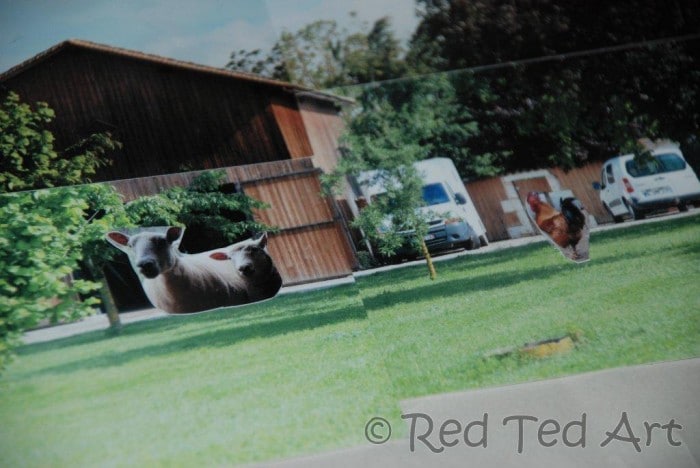 It was a great way to explore a real artist, as well as reminisce about our wonderful holiday. The final piece of art means so much more to us,  than it ever will to anyone else! We know what each photo means and why there are some crazy little details. A great keepsake from our time away.

When we finished our piece, Red Ted had another go with the “remaining photos” – making his own collage.

Our finished collage, made up of approx 30 photo graphs.

It is difficult to see on the image above the “full effect” or our art, but The Englishman came home and LOVED it. Particularly the big tree on the right hand side came out beautiful. We are going to hang this next to Red Ted’s bed.

I asked him what he thought about the artwork and David Hockney – and he said “it is a crazy idea, but I like it”.

I also asked, why he thought David Hockney made his art – and Red Ted said “Maybe he went to a museum and saw it and wanted to make one too”. I told him that Hockney was one of the first to create photo collages like this and Red Ted pulled an amazed/ amused and very impressed face at this!

This collage is a great example of our “Daily Creativity – Cutting” practice. Good cutting skills were core to the element  of adding hidden detail. Check out the rest of the Daily Creativity series of day to day activities that nurture young artists and give you the tool kit to Get Arty!

Now it is your turn!

So.. now it is your chance! We woould love to see what Great Artists you have been exploring with your kids and how you approached your arty projects! Come link up. Kids Get Arty is co-hosted by The Imagination Tree, Imagination Soup,  Creative with Kids , Tinkerlab and Mom to 2 Posh Lil Divas.

Disclaimer: by joining the Kids Get Arty linky – you give us permission to highlight any projects on Red Ted Art or share your craft ideas on Pintrest – we will always link to your site! If you have been aty with your kid’s please link up!

I do hope you have been inspired to Get Arty with your kids and maybe explore a great artist with them too!