Welcome to the New Year and Welcome to Kids Get Crafty! I had a completely different post scheduled for today, but then I remembered that on the 6th January the “3 Kings arrive” to visit the newborn King. I have made a real effort to tell Red Ted all about the nativity and what happened all that time ago. I didn’t want the focus to be just on presents and “Santa”. So we have had the crib up for a while. Baby Jesus made an appearance on the 24th Dec as did the 3 kings: on the other side of the room. They have since been walking a little closer to the crib every day. Red Ted is fascinated. Today’s craft is once again rather simple. Nothing to oooh and aaah about, but we had fun and Red Ted wore his “unusual crown” all day. Crafting should be fun. And fun we had! We have more wonderful Three Kings Day Crafts for you to check out!

Tomorrow (3 Kings Day), we will be making “Three Kings Bread” – this is a tradition common in Mexico (Rosca de Reyes), Spain (Epiphany Beard) and some parts of Germany (Dreikonigskuchen). You are supposed to hide a baby figurine, in the German one a whole set of kings and others just a dried bean or chickpea, if you find the bean/chickpea/ baby you are king for the day or you have “funny bad luck” all day (depending on which country you are in)! The great thing about coming from a multi cultural family, is you can pick and choose your traditions. Tomorrow, I will attempt to make my first ever loaf and I will pick the country’s recipe that seems most fun and easy!! And will find some things to put in the cake for Red Ted and Pip Squeak to find. I can’t wait!

I had a little Three Kings Book previously here: The Wise Men’s Christmas. It is a simple inexpensive book, but Red Ted loves it. Here is another one: 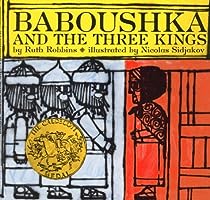 This book is more about “The Baboushka”, than it is about the three kings. However, the book won the 1961 Caldecott Medal for best illustration and therefore I thought it was worth a mention. It it is indeed a lovely book and the illustrations are different and unique. The story is about how the Three Kings have lost their way and stopped by Baboushka’s house and asked her to help them find their way and to go with them. She can’t come as she has chores to finish first. The next day she hurries after the Three Kings, bearing gifts, but never finding baby Jesus. Instead she leaves gifts with other children and the poor.

The book is based on claims of “Russian Folklore”, but others suggest that the “Russian Baboushka” in this story never existed and that it is indeed originally Italian. Never mind where it came from, it is a lovely book and brings anther dimension to the nativity story, also imparting morals (don’t procrastinate and be generous).

I had a bit of a search as to what could be a good “Three King’s” craft – crafting really is a fun way to bring things to life. There were lot so lovely “colouring” pictures to download. But Red Ted isn’t really into colouring yet. So. We decided to dress up as kings! Hooray!

We were inspired by Red Ted’s Three Kings, which, ahem, are a Playmobil set. We look at the different crowns and cloaks and then had a rummage. Reusing some wrapping paper left over from Christmas:

Well. There isn’t much to say, the pictures say it all. Red Ted refused to add the gems, fair enough, his crown! And he only wore the cloak and beard for the photo. The crown however remained firmly on! Hooray!

Base for beard, some paper & ribbon:

(It was Red Ted who insisted on a beard, as one of the 3 kings had a lovely white one!)

(not of course that he would wear it)

The only problem now, is that we need another Two Kings… mmmh. Thank Goodness for Mummies and Daddies.

Do check out our other Three Kings Day Crafts:

We also have an amazing set of WINTER Crafts for Kids: