Hello, with winter in the air and Christmas not too far away, we decided to make some snowmen… well actually, I wanted to make some more Christmas Trees for our “Christmas Tree” bunting, but you know what Toddlers are like…. so I whipped out some card and snowmen it is! I reckon alternating these with the trees will look lovely too! Later we then got crafty in the kitchen. Yum yum.

When I think “Snowman”, I also think of the 80s (UK?) classic short film “The Snowman” cartoon and music. And everyone knows the “We Are Walking in The Air” song:

As sung by Peter Auty (the Aled Jones version did not come out until a couple of years later). I hope you like it too!

A bit more info for you about the book and the film. 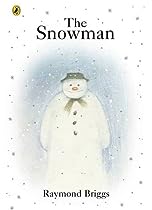 The Snowman, Raymon Briggs. The original book plot does differ from the film: A boy makes a snowman, which on the stroke of midnight comes to life and explores the boy’s house, appliances and toys – being very confused by them all. The boy wakes up and makes them a mid night feast after which they go for a fly. The next day, the snowman has melted and little boy is uncertain as to whether it was all a dream. In the film, they go and visit Father Christmas who gives the boy a snowman scarf – this keepsake is still in his pocket when he wakes in the morning. Both film and book are wordless (save for the song “Walking in the Air”) and you know how I like wordless books in our bilingual family! It is a lovely story of  “imagination” and what happens to things when we go to bed, beautifully illustrated and a firm classic in British Christmas culture (though the original has nothing to do with Christmas at all, just snowmen)! The short film was first shown on Channel 4 (then a fledgling TV station) on Christmas Eve in 1982 and was an immediate success.

Knowing Red Ted, it helps him to have a “sort of guide”. I drew a rough snowman – two circles, a hat, eyes, nose and buttons & stick arms as a “template”. Then I cut out “all the bits needed for a snowman” from some salvaged office card and pointing to the drawing asked Red Ted to “assemble” the snowman. Interestingly, he made two different ones! One with arms and a face drawn in, and one without arms but sequins face and buttons!

I just pointed to the different parts of the snowman and said things like “do we need a hat”?

And they look nice with the tree too!

A day or two later, we made some icing cookies:

Didn’t he do well? I did straighten out one Smartie or two…

If you have been crafty with your kid’s be it at home, in the kitchen or outdoors, I would love for you to link up:

If you enjoy blog hops and link up parties.. do go and visit Cathy at the fabulous Play Academy every Friday! Just click on the badge below!