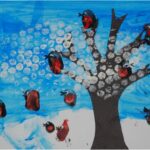 As you may have read, we are planning to do a Calendar at the end of the year for 2012, based on pictures, crafts and paintings that we made throughout 2011. So, after seeing these lovely Christmas Scenes over at Ik Zie Ik Zie and Mermaid’s Creations, we decided to have a go. It was a joint effort (Red Ted is not quite 3), but I believe we did well as a team. Red Ted is so pleased with it, he wants it by his bed. A photo will go into the calendar! Older children can do this all by themselves! We will also make a calendar with Pip Squeaks colourful efforts. It will be a great way to see her progress throughout the year!
As I usually join in with the stART projects over at A Mommy’s Adventure, I always bring a book too. Today, however I have a poem about a little robin.
The robin is a symbol of winter and Christmas in the UK (the UK Postie used to be nickednamed “robin” for his red uniform, later robins became a symbol for bringing Christmas mail and now frequently feature on UK Christmas cards). Also… whilst we were growing up, we used to have a Robin visit our garden to pinch some of our milk that the milkman brought and left outside the back door: it would peck at the lid and drink the cream off the top.

Little Robin Redbreast jumped upon a spade,
Pussy-cat jumped after him, and then he was afraid.
Little Robin chirped and sang, and what did pussy say?
Pussy-cat said ‘Mew, mew, mew’and Robin ran away.

This rhyme suggests a belief that if you injure or harm a robin bad luck will befall you.

Hurt a robin or a wran
Never prosper boy or man

I really want to have a go at the “Four Seasons” with Red Ted – the same (ish) scene once every 3 months. Trees are fabulously representative of the 4 seasons – with its bare branches, buds, leaves and autumn leaves.. so the tree forms be basis of our picture. We then have the robins as explained above (though you usually only find one – I believe they are very territorial), followed by our first proper experience of snow!

Materials: White paper, black/ brown paper for trees (though you can paint one on), paints, bubble wrap for snow, brushes & scissors

1) Paint a background – we chose a blue sky and white snowy ground – surprisingly Red Ted was “ok” about leaving the bottom part white. Often he wants to paint all of it! In this case you could cover it with masking tape.

2) Cut out a tree for the child to stick on – I cut 4 identical trees for our scenes later in the year (yes, that’s how accurate I am being… crazy me). You can of course paint a tree or make a collage tree out small bits of paper. Glue on the tree

3) Make snow: we painted the bubble wrap and pressed it on – Red Ted LOVED this bit

4) Robins: My thumbprint for the base and Red Ted’s for the Red tummy! This time it was a little harder to persuade him NOT to paint everything red. So our robins are joined by one cardinal!

5) When all dried, add a little eye and beak – I did this under Red Ted’s supervision 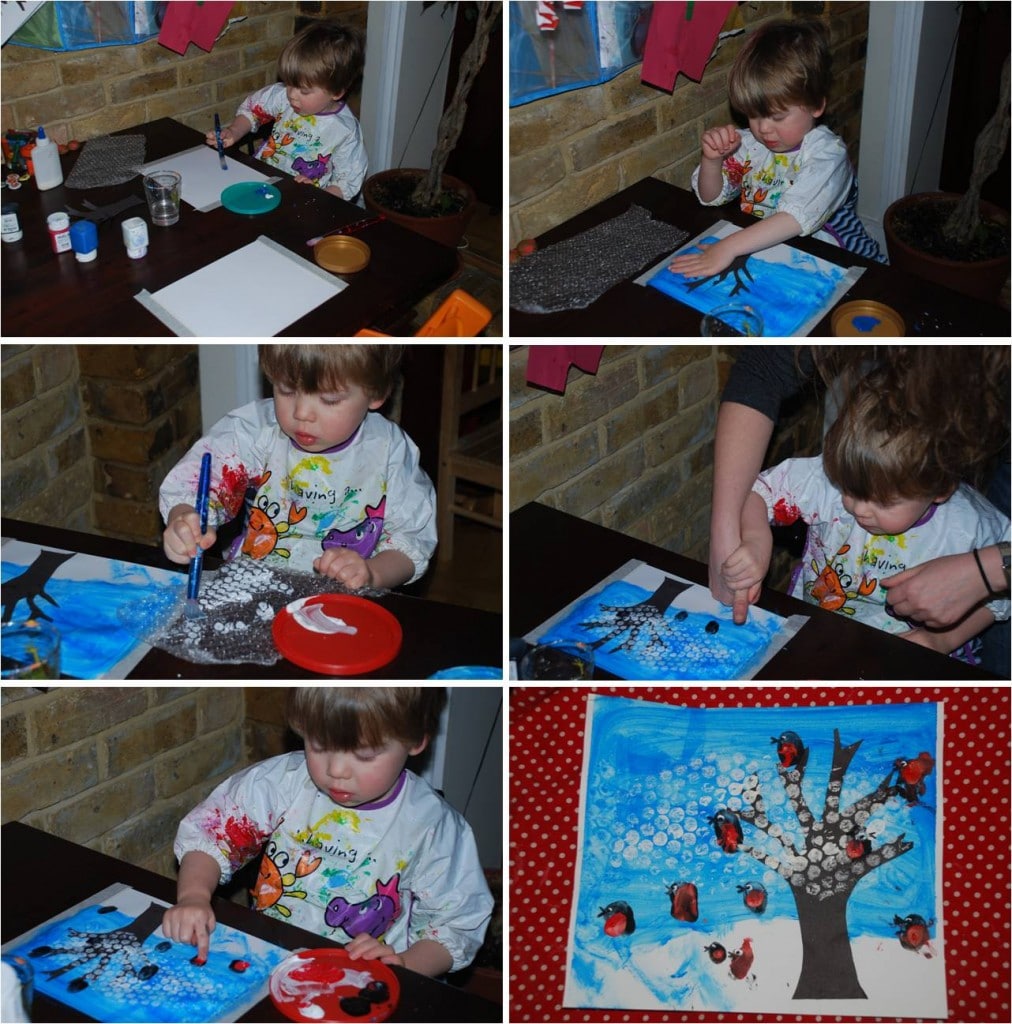 Lean back and admire! (UPDATE A  YEAR LATER: here is the full Four Seasons together)

Pip Squeak also got to paint and here is her effort 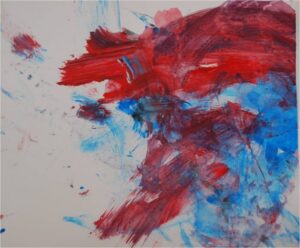 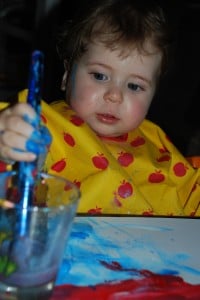 Lucky for us we were given the Once Upon an App Bird App for review a while back – it actually features a robin and a cardinal, so we had a look at this again too! 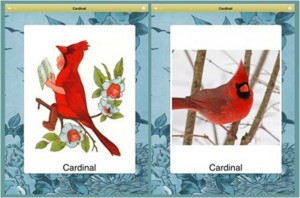