I made this reward chart about 18 months ago, if not longer…. and I have sent pictures of it to friends over time. I decided I should really do a “quick craft post” for you! I made it in less than 10 minutes from things around the house: 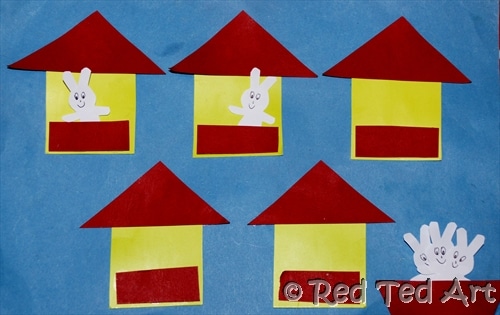 All I did was cut out rectangles, squares and triangles and 5 bunnies. I stuck the side of rectangle down, so the bunny slots in (see white marks): 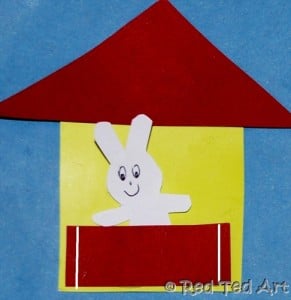 When Red Ted is good, he gets one bunny “from the boat” and it goes in the house…

We have also used this reward chart for chores. The basis of the chore is that Red Ted “chooses” to do the chore. I don’t force him, but remind him, that if he “chooses” to do the chore he gets his reward bunny. I am hoping that by making it a choice, there is less whining and reluctance about “having” to help. So far it is quite successful. Red Ted will help me with the laundry most of the time. Then we have periods of 2-3 weeks when he doesn’t help at all. He then remembers the treat box (or sees his sister succeeding in getting a treat) and is spurned on again to help. I think the choice is key to us.

I think this chart works well as (for us):

I can highly recommend making and using a reward chart!!!