Welcome back to Kids Get Crafty! Finally the kids and I got out our easy salt dough recipe and got crafting. I do hope that today’s topic of, ahem, pooh, hasn’t put you off and that you will stay for a read…. Pooh?! Who crafts with pooh… well we do… and there is a story as to why! But first to our salt dough recipe – exploring a bit of colour theory, some dinosaurs and two stories. 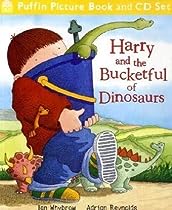 Harry & The Bucketful of Dinosaurs, by Ian Whybrow. I decided it was time to “broaden” Red Ted’s horizons and introduce some dinosaurs into his world (I have another fab dinosaur craft up my sleeve and need Red Ted to be “keen” on dinosaurs before I can do that one). We already have Harry & the Robots, which Red Ted adores, so when this book was suggested to us, I thought it would be perfect. And indeed it was. We find Harry in the attic with his grandmother sorting through things – when he finds an old box full of dinosaurs. He brings them down, cleans them and fixes them. Learns all about their names at the library and becomes great friends. One day however, they are lost and Harry is inconsolable. Luckily the lost and found office has indeed found them – *phew*. What I love about the Harry books (or at least the ones we have), is that it encourages to make, mend and clean – it is never “about the new” toys, but about the ones that Harry has put lots of love and effort into. A great message in my eyes. It also encourages about learning and passion. Perfect. We love the book and it gets the big thumbs up!

And, ahem, another book:

The Story of the Little Mole Who Knew it Was None of His Business, by Werner Holzwarth. Ok, this one is for the Dad’s. Toilet humour through and through! But I mention it, as it is not often that a GERMAN author is translated into English AND does REALLY well. Did you know this is originally in German? There you go! I love buying books from different countries it really makes “our library” more interesting. Here we have a story of a little mole that wakes up one day, only to find that, erm, someone has done their business on his head. Off he goes to find out who it was… Surprisingly cute (?!). Maybe a good one to get when you start potty training – though nothing to do with potties, toddlers often get obsessed with Nr 2s at that stage at may really enjoy it. Go on… you know you want to! Available in German & English (and possibly other languages?).

Another reason it is featured here, is, that I have been taking part in the Notes From Home carnivals whenever I can. Recently there was a twitter discussion, whether there should be a carnival of pooh… well… how can I not take part?!

I thought the carnival of pooh would be a great way to explore colour theory – well not just the colour brown, but how brown is “made”. Usually, if I let Red Ted paint with as many colours as he wants, we usually end up with a brown at some stage… so to make it more interesting, I though we could make our easy salt dough recipe and explore… not wanting to delve straight into brown, I wanted to try greens, oranges and purples – enter the dinosaur craft:

1) First I made salt dough in blue, red and yellow. Our red paint looks a little pink like, so we called it pink, but it is kind of red…  to make salt dough:

2) Having divided the dough into 3, I added the paints – as this step can be a little messy

3) Start salt dough crafting – I pointed to the book and asked Red Ted which dinosaur he would like to make and then asked him about the colours we need… lucky for me he pointed to the green one with the orange spine… so “Red Ted, how do you get Green?” – blank face. I told him we take blue and yellow and do lots of mixing. I had to help get the “final green”, but he had a go…

4) Shaping the dinosaurs – very interestingly, I said to Red Ted, “what do we need?” “A body” “A head” “what is on the spine” etc… Red Ted started making dinosaurs quite similar to the pictures (for his age group). If left him to it, we got new creations (sometimes parrot like, sometimes blobs)… I think a combination of “questions” and “free play” are best – this way he learns to look at details but also gets to do his own thing! I encouraged “sausage making” for tails and small bits for eyes (our pink dinosaur has HUGE eyes).

5) I then asked him what would happen if we mixed ALL the colours together  – we did it and got a grey! I was hoping for brown – I believe it is the salt that turns it grey? I didn’t really want to make grey pooh… but when we looked at the mole book, I realised it was PERFECT mole colour! So we made a mole and an orange pooh instead. Perfect. The I hasten to add that the mole was a joint effort. Red Ted isn’t able yet to do “details” such as a small nose and arms. His approach is wedging stuff on, which I then shaped a little. Red Ted then made a yellow dog, with pink eyes and a blue tummy. Lovely.

6) You can bake salt dough in the oven at around 100C (low heat). I did this to help it set, then turned them upside down on our radiator to help the centres dry out… this can take a few days.

I believe the mole and dog are his favourite – his love for these and thus the pooh book just goes to show that he is a boy through and through! *Sigh*.

Red Ted loved them so much, he didn’t want to go to nursery (where is only one day a week and he LOVES), as he wanted to stay home to play with them all and make “more” with mummy…

Linking with the upcoming Notes from Home Pooh carnival.

What have you made from Salt Dough in the past? Have you got a fail save recipe or other ideas? ALL kids related crafts very welcome – but today especially salt dough & dinosaur crafts!