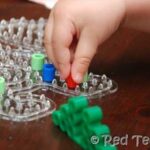 Before I write ANYTHING and bore you with my rambling, the kids LOVE the Hama beads. They made them straight away  the day we got them and then again were at it first thing the following morning. What can I say, save for HOORAY!

Hello hello! A quick sneaky craft for you: Hama Beads! I remember these from my childhood (I love the smell of the melting beads) and remember making tons of flowers. However, since entering the blogging world, I have heard these referred to as the “Devil’s Spawn”… mmmh. Not too good, is it? I have been eyeing up Hama Beads for a while, thinking about if and when I should give these a go with my two.

I was chatting on twitter with @merrilyme who has a “Craft Merrily” online shop (amongst others) and she was telling me how even the littlies can have a go. Especially since now there are special “Maxi Beads” for younger children. She sent us two packs – a clown and a dinosaur. LOVE the dinosaur. HATE the clown (I have a clown thing), but Red Ted saw both and just said “wow wow wow” over and over again. And we had to make them STRAIGHT AWAY. 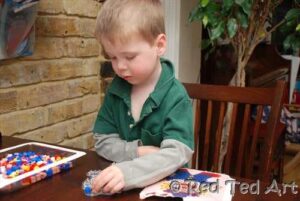 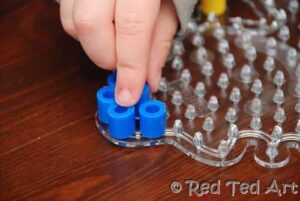 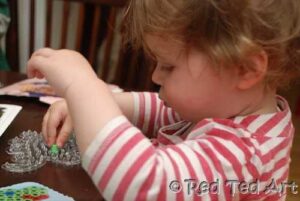 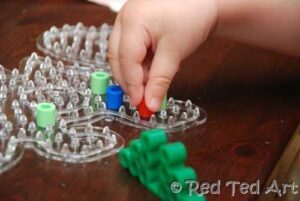 Now…. Red Ted is 3yrs and 3 months. He was surprisingly good. And only needed 2-3 pointers here and there. The template has “handy” shadings for where the mouth goes and the eyes. Also, if you want to, you can place the template over the pattern and you can place you beads on top. Red Ted did not want to this, but preferred “looking at the pattern” next to it. I was surprised

a) how good he was

b) how much he liked doing it

c) that he FINISHED it

d) that we even snuck in a bit of counting

Pip also had a go. She, of course just placed the beads wherever. But I still thought she did a fabulous. And Red Ted completed it for her later. 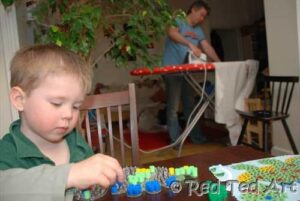 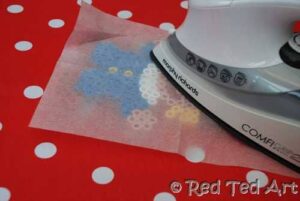 (PS don’t you just love the fact that The Englishman is ironing in the background?! Hehehe)

I like that there were plenty of extra beads, which we have put in a jar, either for playing with (more dexterity practice) or for making some simple bead bracelets at some point!

We then ironed it. Did I mention we got our spangling new Morphy Richards ComfiGrip Iron and super duperShirtmaster Ironingboard? Morphy Richards is desperately trying to make me more House Proud… I am desperately trying to stay undomesticated. Hehehehe you will have to try harder than that: The Englishman LOVES the new ironing board – it really does help him board his shirts better – more space and the iron is a great “shirt shape”. Red Ted LOVES the new ironing board, because it “looks like a ladybird”. And I LOVE the new ironing board, as there is plenty of “surface” for me to spread out anything crafty that needs ironing – like the Hama beads. It also provides a fab background for my “craft photo” shots. I think 1 – 0 to the non domestic wife I am… The Comfigrip Steam Iron is rather clever looking. And The Englishman has begged me not give it to his brother as a House Warming present. Ok, maybe I will try ironing a shirt with it too. But just one of Red Ted’s. And psssst, don’t tell anyone I did so! 1 – 1 to Morphy Richards… one step closer to being domesticated.

Back to the Hama Beads.

So, I ironed the Hama beads. They did their melting magic and I handed them back to the children. I haven’t seen either piece since!

Now, to the great Hama debate – is it REALLY Devil’s Spawn? 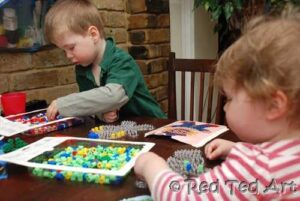 Well,  I think it depends on how you look at it: if you want this to be a “perfect activity” – then do not let an 18mth have a go.  Beads will land on the floor, templates will get knocked (meaning starting all over again).  Yes, I am sure, that at some point the “artwork” will fall apart and there will be some tears. But then I will just iron them again. If you are doing this for some colour, dexterity, pattern recognition and a bit of counting fun, then these are PERFECT. Also a great activity to help concentration. I think it is worth giving them a go at least once in your home and see whether you kids like them or not. If not, use the bead as beads, if yes, then create more Hama pictures. Get Maxi beads for the wee ones and regular ones for the older kids!

I am most definitely tempted to buy some again… I did not think I would say that, but I do think we will be getting more.

If you buy them: don’t have too high expectations. Stay calm and ENJOY. “Worse case scenario: the pattern is not made, but you have fun playing with lots of colourful beads”. The children will love them. And that is all that matters.

If you fancy trying them out, have a chat to @MerrilyMe or take a look at her website: