Yay! Finally “The Big Day” came. And it went. You spend weeks looking forward and preparing for something and then it passes in a flash! Today was Red Ted’s long awaited homemade cars party!!!

So far we have only ever had “family” parties for the children’s Birthdays and this year was the first time we had “lots of children”. Having a typical UK house and being in the middle of Winter, space was an issue, so we were limited to 8 children in total. Which meant four 4 years olds and four 2 year olds at the cars party + mothers and The Englishman!

Soooo. What did we do?

We had 4 “organised” games and then lots of adhoc ones: 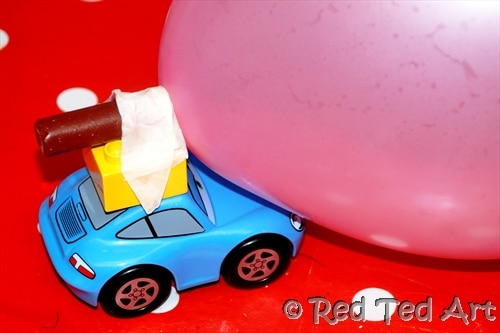 Our Crazy Balloon Race! See these in action in our Cars Party Preview! 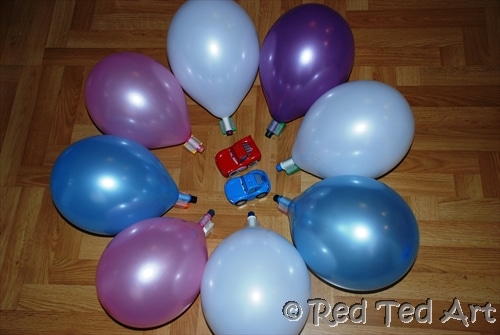 I prepped all the balloons ahead of “race”. We ended up having to “race” them one after each other and looked which went the furthest. 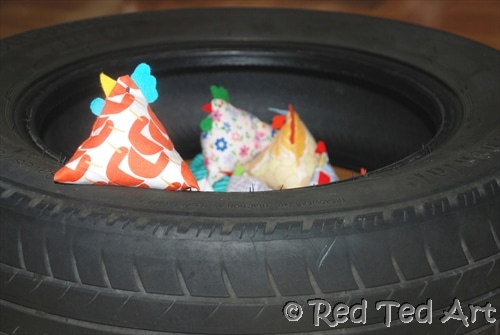 Interestingly the children LOVED this game whilst it was easy.. as soon as I moved the tyres a little further away.. they didn’t like playing any more. I guess the excitement of the party was enough and they all just wanted to succeed. LOVE that the 2yrs olds had a go too! I think we will be playing this game some more over the coming days! 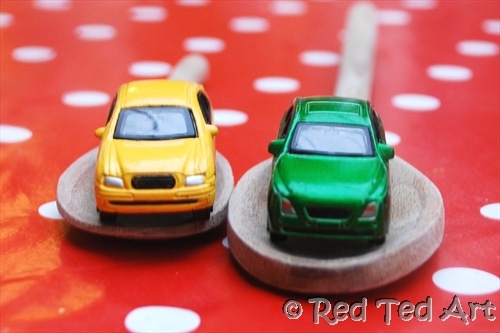 Yep.. know Egg & Spoon Race? Well this… is a Cars & Spoon race! The perfect Cars Party game!!! Note: we found it easier running with the cars resting upside down… else they really would slide off the spoon! 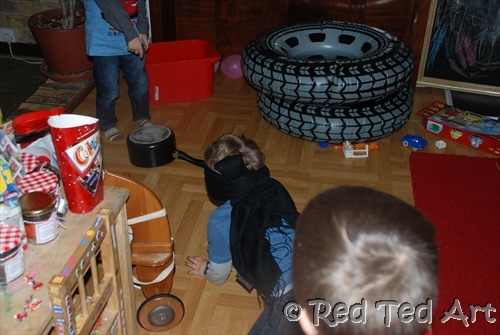 Ahem. Not the best photo at all..  but it was impossible to do the game with the kids and get a good picture. And ahem, it has nothing to do with cars. But Red Ted adores this game. This is “Topf Schlagen” – a traditional German game: the child is blind folded and given a wooden spoon, with which they have to find a pot by tapping the floor. The other children shout “hot or cold” if they are getting close (hot) or moving away (cold).  The player is rewarded with a sweet or small toy. 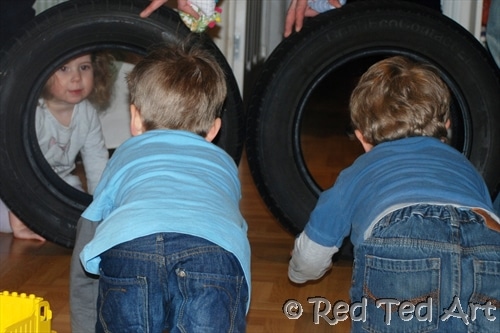 This was one of our adhoc games and we basically played “relay games” of sorts with the tyres. We made it up as we went along! The children had to run up and down the corridor and each time scramble through the tyres. 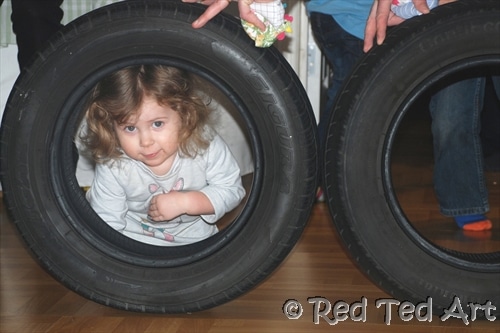 A success all round!

If you can’t get hold of real tyres (our local garage gave me these for free!! How lovely of them!), why not try inflatable tyres? The younger kids ADORED these: 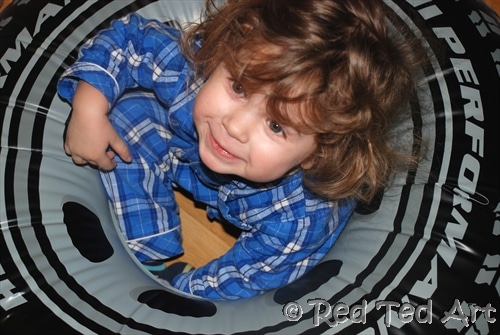 Pip Squeak spent all day in one of them!

We had two activities, to bring a little calm into our afternoon!

Our Traffic Light and Cars cookies highlighted earlier and week (plus recipe). 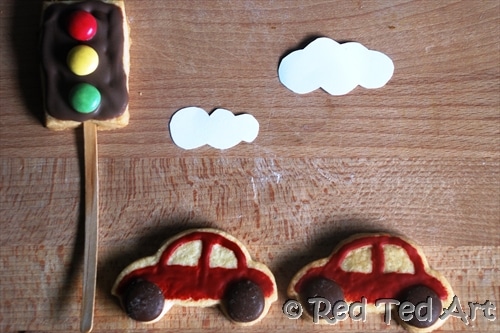 The kids got to get messy and decorate their own! 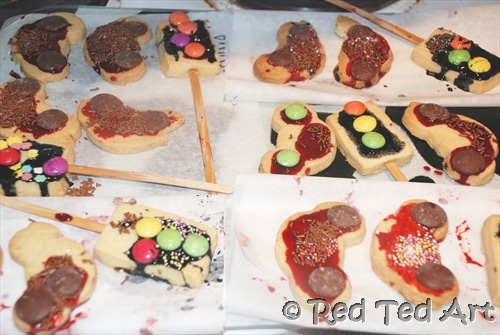 I made our icing a little runny! Ooops. Still… the kids had fun! 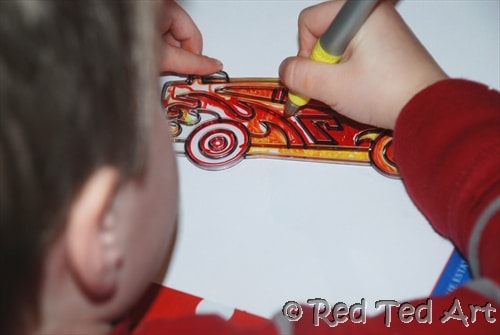 On recommendation of a friend we bought some “stained” glass cars to colour in. They LOVED it. Above is one of our guests who apparently “never likes to draw”, drawing away and doing a  fantastic job! 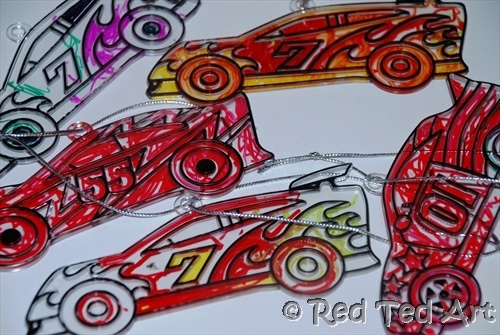 And ever party must end with cake and a Party Bag!!

First I made our party bags out of old lego colouring books we had – luckily the colouring book was all about cars! And I used this How To Make Funky Party Bags to make them. Super easy. Though I did reinforce them with tape. 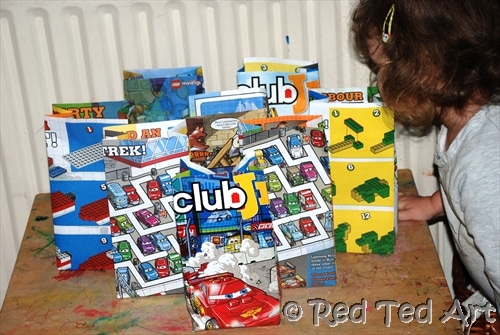 We had lots of little bits for the bag, but the main “gift” was an idea from The Imagination Tree – homemade playdough recipe, in a jar, with a car shaped cookie cutter. Perfect. I made no less than 2.5kg at the weekend and the divided it all up: 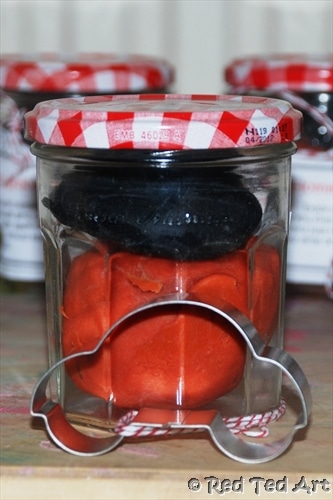 I added labels as most of the mums I know, have never used homemade playdough before..

And finally.. the cake. We decided to keep it simple, but fun – a “race track” with Red Ted’s favourite and (brand new) toy cars on a racing track, surrounded by smarties: 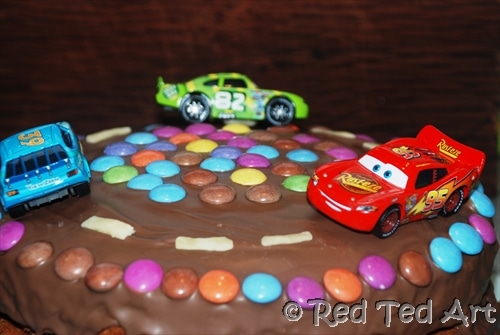 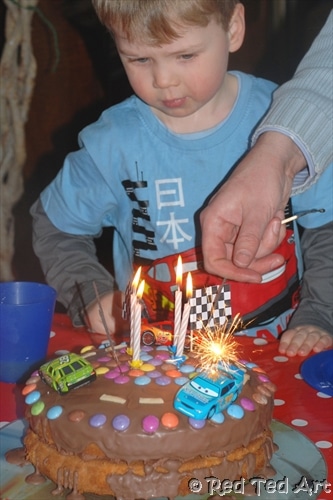 Happy Birthday Red Ted!!! I love you and I am so proud of you!

You are growing up so quickly into my handsome, thoughtful and very very special young man!

I hope you liked your Cars Party and that you had lots of fun. Sleep tight.