We have long been fascinated with easy slime recipes here on Red Ted Art, but confess to have never really gotten “into it”… mainly because many of the “main” and popular slime recipes use borax or laundry detergent – and a) borax is banned here in the UK and b) laundry detergents vary and c) recently… there have been stories about burns from slime recipes and children getting sick from playing with borax slime (read all about why you shouldn’t make slime here).

The problem is – the majority of us are not chemists, we as parents, don’t *really know* if a slime recipe is safe or not? So I have kind of steered clear of slime (apart from oobleck of course – because it is so easy and fun and clever and genius) for some time.

As note – you will see that many of these recipes have a common ingredient – either cornstarch or gelatin/ jello or psyllium husks. But there are many variations, and OTHER ingredients too.. so I do encourage you to explore and “lose” yourself in these clever ideas.

Slime is wonderful for sensory play, for preschoolers and to be honest “big kids” too. Don’t underestimate the power and fun of slime!

NOTE 2: wherever we mention EDIBLE slime, we do not actually encourage the EATING OF said slime (unless the article in question says it is FOR eating), we are saying – if you child accidentally eats a LITTLE you needed worry. Please always supervise slime activities with kids! First shared in March 2017 and updated and republished for your convenience. 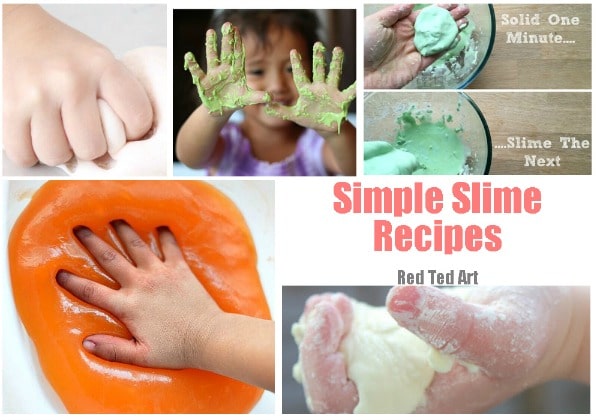 This simple slime recipe section is for the EASIEST of all slime recipes. Often only need a couple of ingredients. These are the ones you can get stuck into quickly and easily. Nothing quite like the classic goop recipe  but do check all these other ideas too!

Use what is perceived as classic slime and make it that little bit more magical and special. Whether you are adding sparkles or freezing your goop recipe, or turning it into something seasonal, check out these extension ideas.

When I first out bringing together these non toxic slime recipes, I really thought we would ONLY be playing with variations of oobleck. A search has brought up SO MANY great and fantastic recipes, that I am really excited about slime play again. There are so many more ideas than I expected. I do hop you like these no borax slime recipes and are inspired to have safe slime play time fun! 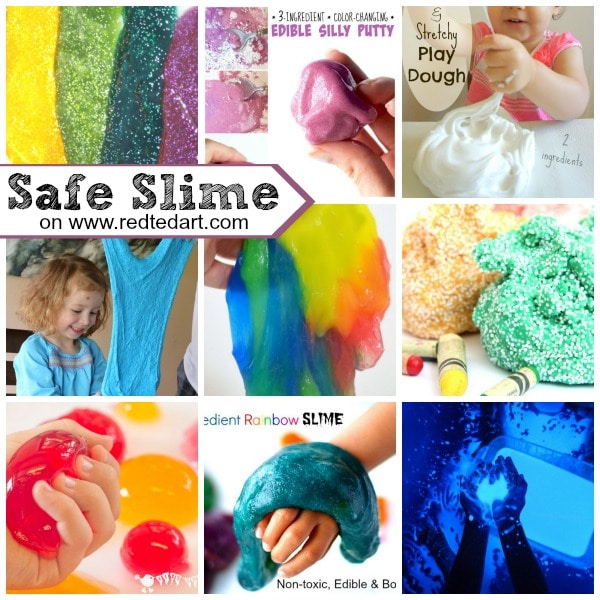