Oh how we love Easter Crafts and Easter Chick DIYs! Welcome to this week’s Easter How To… a few weeks ago, I saw some very lovely felted nests over at Cara’s blog Freckles Family and asked if she would like to do a guest post. Cara is a keen and fabulous knitter and always has one project or another on the go… she is also an amazing photographer, so do stop by her blog and check out her beautiful photos or go straight to Freckles Photography for more. As to the chick.. well, I thought Iwas getting a nest… and what do I get? A nest AND a chick.. AND when you lift the chick up, some little hidden away eggs (check out the last photo below).  I mean, HOW ADORABLE is that?!?!  Simply too cute and much more than I “bargained” for. So, a huge thank you to Cara for this wonderfully lovely How To just in time for Easter (though why not make it any time of year?!?!). 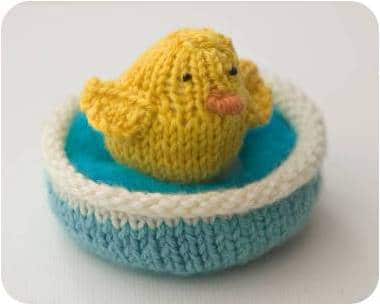 First published in March 2011 and updated for your convenience!

I was delighted when Maggy asked me to guest post a little idea for Easter knitting.

I went on the hunt for some bright yarn to make some felted nests, a smaller version of my original nest pattern. Before I get into the tutorial, let me save you from making the same mistakes as myself. I had assumed that any yarn with a 100% wool content would felt (hot wash method). Not so. I believe it needs to be of at least an aran weight & have some mohair content. I had some ‘interesting’ outcomes with double knit 100% wool, so won’t be recommending that. However, I think the unfelted little nest works just as well.

SSK slip 2 stitches knitwise, one at a time to the right needle. Insert left needle through both front loops of slipped stitches and knit together.

K2tog knit 2 stitches together to decrease by 1 st

Row 2 and all even rows: purl 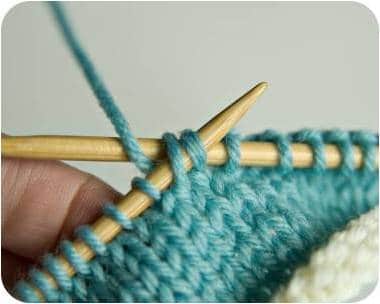 What the SSK looks like as you are about to knit.

Break off yarn with enough to thread and use to sew seam. Thread onto darning needle, gather tail through remaining sts and pull tight. Seam up remaining edges trying to keep as flat as possible. Darn in loose ends. 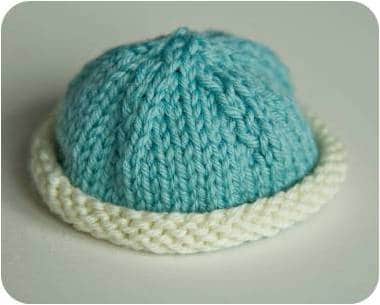 To give it more of a nest shape, I wet the nest. Squeeze out excess moisture by rolling nest in a tea towel. I then found a little bowl to shape & dry the nest over.

Although DK yarn usually calls for 4mm needles, to make the chick a tighter knit and not allow the toy stuffing to appear through the stitches I knit this on 3mm needles.

Break off yarn leaving a long tail for sewing up and thread through the 4 sts, pull tight.

Join the seam from the top of the head down towards the bottom of the chick. Before getting too far down the seam stuff the chick before the hole becomes too small.

I pre shape a round ball of stuffing for the head, and then a larger round ball for the body. This helps the chick to have its round stocky shape.

Close the rest of the seam and over sew at the bottom to secure.

I leave the long thread ready to push up through the chicks body to come out at the side ready to sew the wing on and then take it back through the stuffed body to the other side for the second wing. This saves on securing too many thread and makes the construction of the chick quite secure. 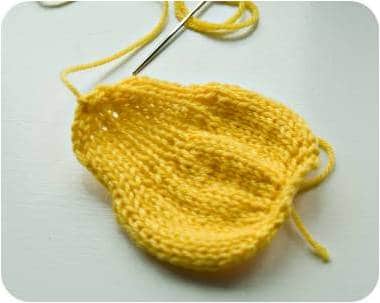 Cast off, sew in ends 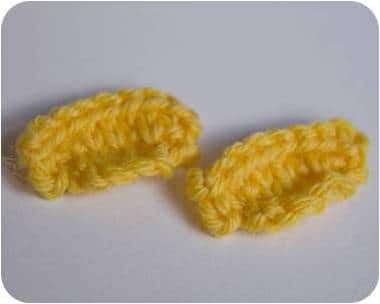 Turn over the front edge of the first wing and over sew this as you attach the wing to the chick. Sew the wing down the front edge onto the chick body and about half way along the top of the wing. Leaving the back half free from the body so it can appear to be flapping (see pic).

Repeat for the second wing. 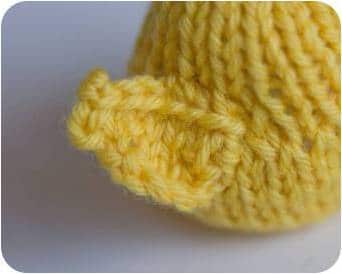 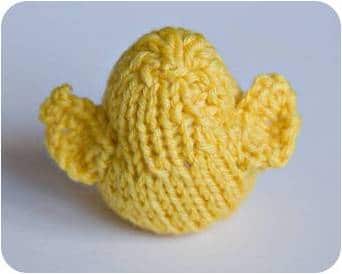 Using the orange yarn, make a slip knot , leaving a small loop about the size you want the finished beak to be. Over sew the yarn into the middle of the loop working all around the loop, as the hole starts to fill up, work as many times as you can until the beak is quite robust.  Position the beak in the centre of the chicks head, centrally between the two wings. Attach by threading the tail thread through the chicks head and catching a few stitches around the beak to secure.

Using a small length of black darning or tapestry thread doubled over, make a french knot  either side of the beak, see the picture as a guide. 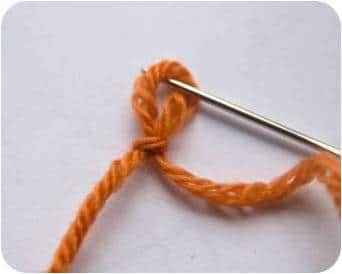 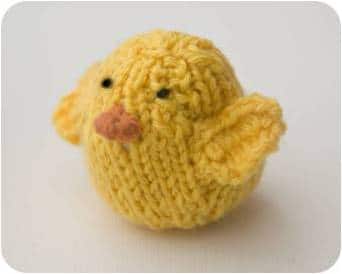 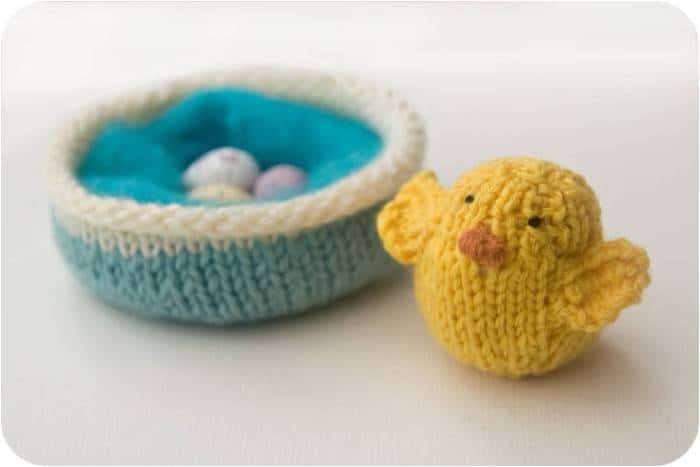 There you go! I estimate I completed the nest and the chick in a good hour and a half. 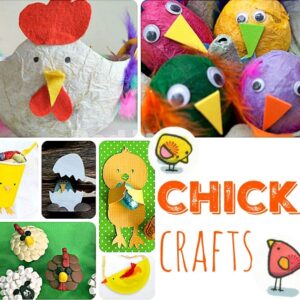