The kids and I are Pom Pom mad right now (do check out our Pom Pom Crafts & Ideas)… I come down in the mornings and our Pom Pom seem to just multiply of their own accord. We have our new Pom Pom Maker (see info below) to thank for that. Needless to say, you can make pom poms with two circular peices of card, a fork or a rectangular piece of card, or even just using your fingers (full list of How to make a pom pom techniques here)… but I do like our pom pom maker, as it has given the kids an autonomy that they haven’t had before! And as it is Spring, we thought some Spring pom poms would be nice: pom pom birds or pom pom chicks if you place them in a little nest. We also have the cutest Pom Pom Chicks for you here.

Also check out these How To Make Pom Poms – 7 different techniques!! 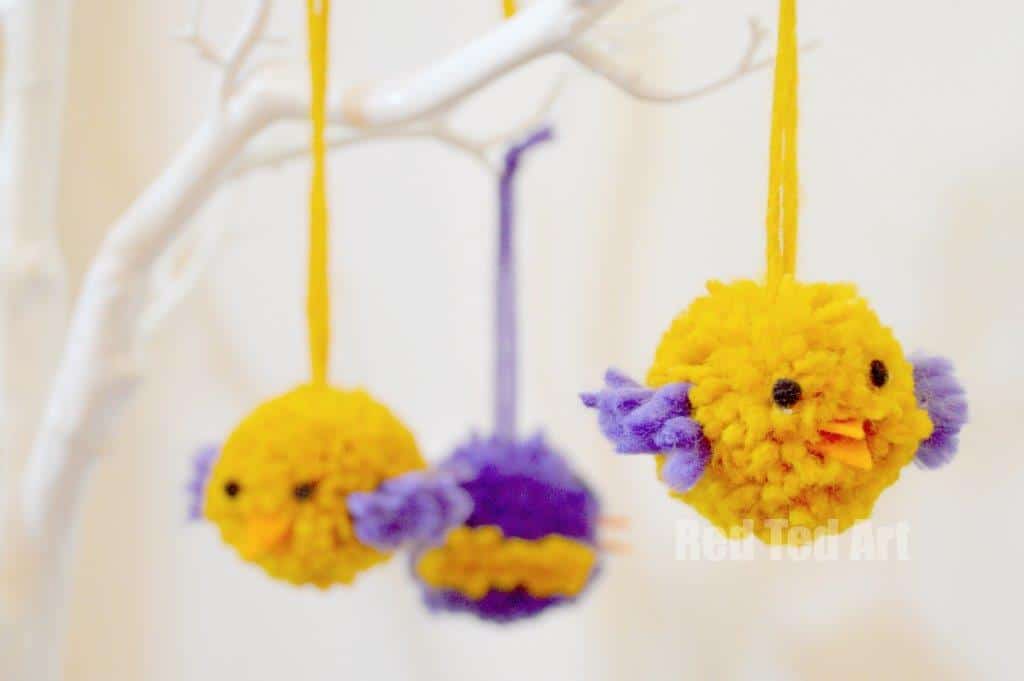 Mr Printable is an AMAZING crafter that makes WONDERFUL pom poms (he has the cutest lion, koala, tiger etc imaginable).. and I “pinched” his little pencil trick to make our pom pom bird wings, after seen these pom pom birds on google, but without instructions. So I decided to experiment.

If you don’t have a pom pom maker, fear not, check out these Pom Pom Making Techniques!

Pom Pom Birds How To:

(How to use a Clover Pom Pom Maker)

And here is how you add the little WINGS to your Pom Pom Bird: 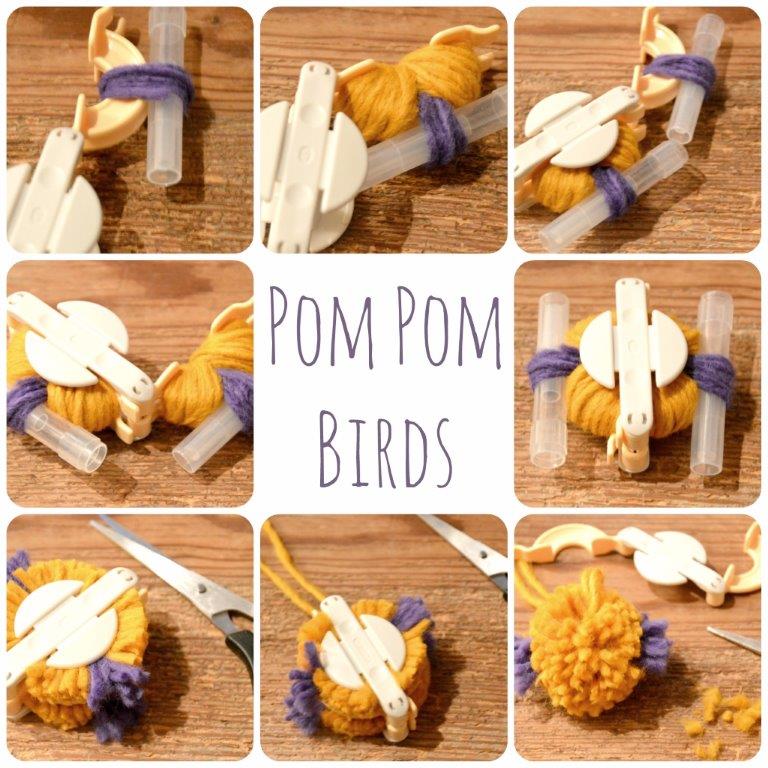 1) Start by making the wings – add your penicl or lid to the side of your pom pom maker to make the pom pom chick’s wings. I wrapped the contrasting colour about 10-12 times narrowly around it. (top left picture)

2) Switch colours and make a thick pom pom with the second colour. If you are using to circular sheets of card, make sure that your “wings” are on opposing sides of your pom pom circle – so that you get your pom pom bird with nice eveb wings on either side. (top middle picture)

5) Now it is time to cut your pom pom bird’s wool: cut with sharp scissors (if you use blunt ones, this can be very hard work – the sharper the front of your scissors is, the easier this will be!) (bottom left picture)

6) Wrap your wool around your pom pom and tie a double knot – I made sure that the knot is exactly between the two wings, so that you can then “hang” your pom pom bird the right way round. (bottom middle picture)

8. Cut some eyes and a beak from felt and glue in place (a hot glue gun is great for this, though good PVA glue will do too). 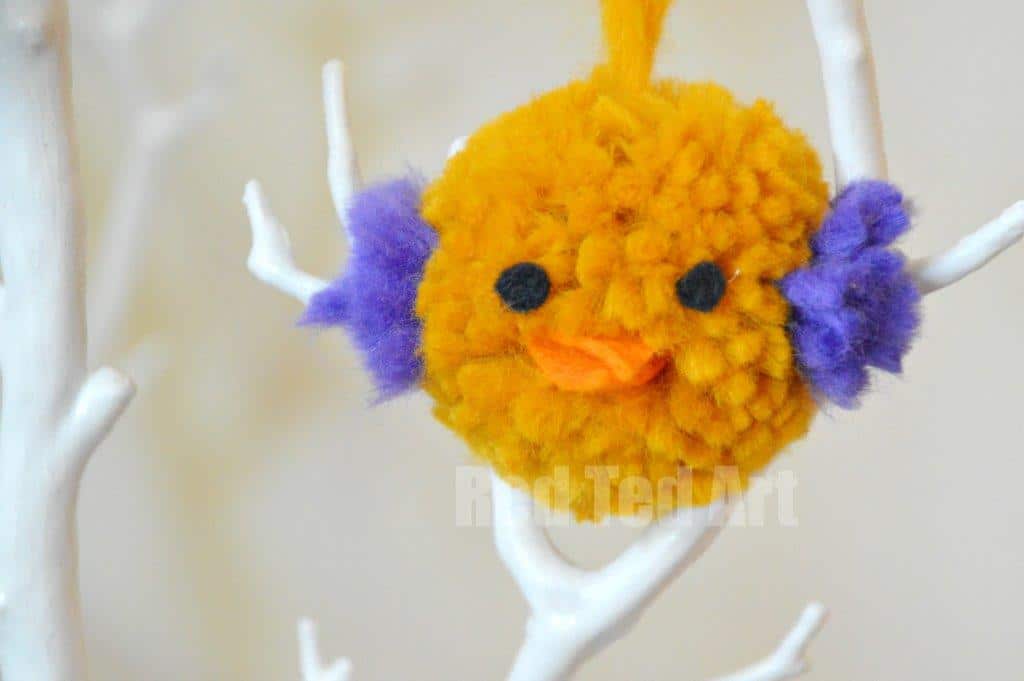 Try out different colour combinations! And experiment with googly eyes! 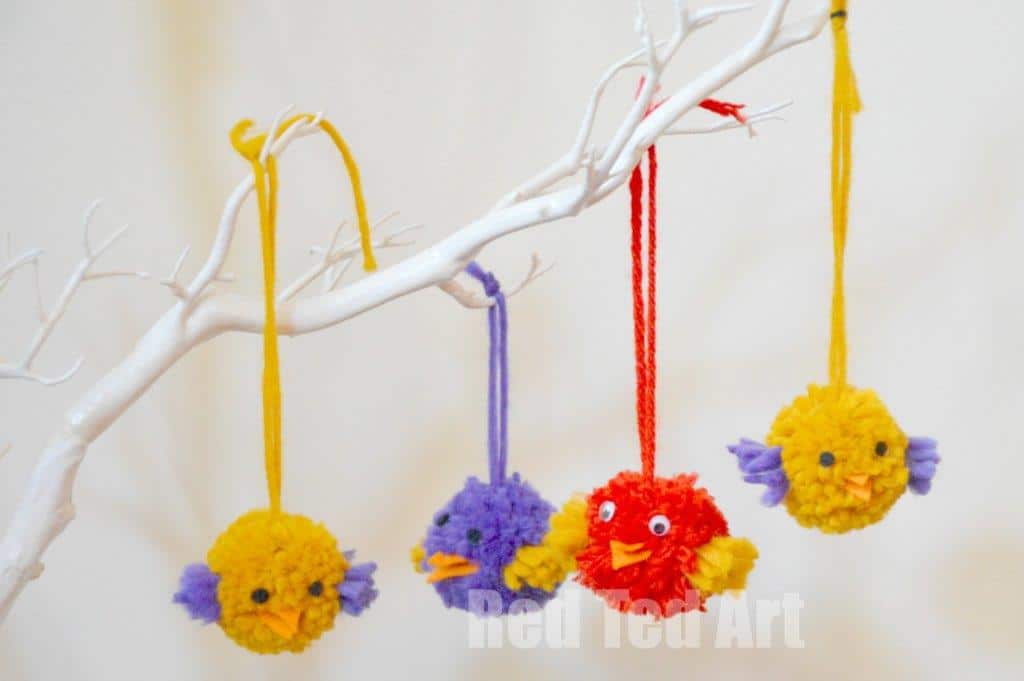 Awww we do love our Pom Pom Birds!!! 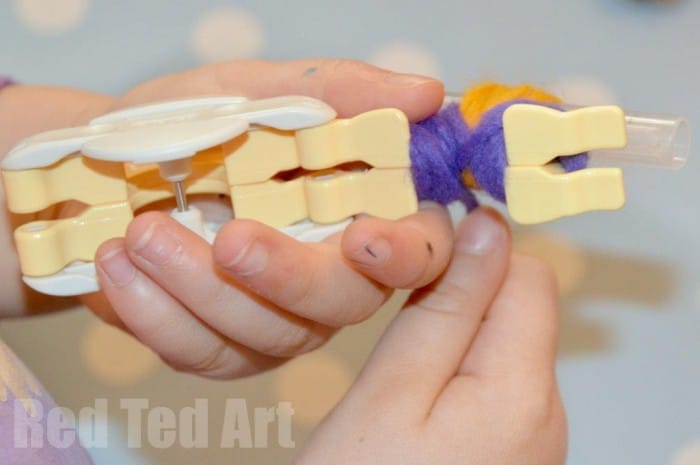 And here is my four year old at work… gotta love these  Pom Pom Makers!!  I had to “start her off” with the wings bit and she did the rest! 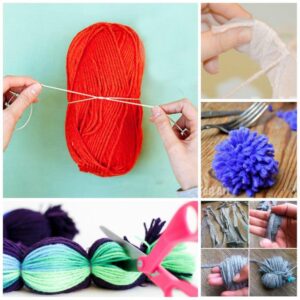 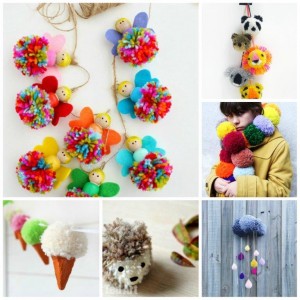